Sitting at the kitchen table. With our own digital bicycle website over the Fjärdhundandand in front of me on the laptop, I think for a moment on our route. I have my help Norstedt's bicycle map number 27 over the eastern lake. Soon I see that it would be best for me and my brother to spend the night at Brunnsta farm which is north of Bålsta.

I click on the bed symbol and come to the farm's presentation page as bike-friendly accommodation. Calls the phone number and asks if there are rooms. Lena Glantz Eriksson runs a farm and has a lot to do, many guests, but promises on the right arm that my brother and I will get a double room on the same national day on June 6. With my satisfaction, I write it in my analogue pocket calendar. 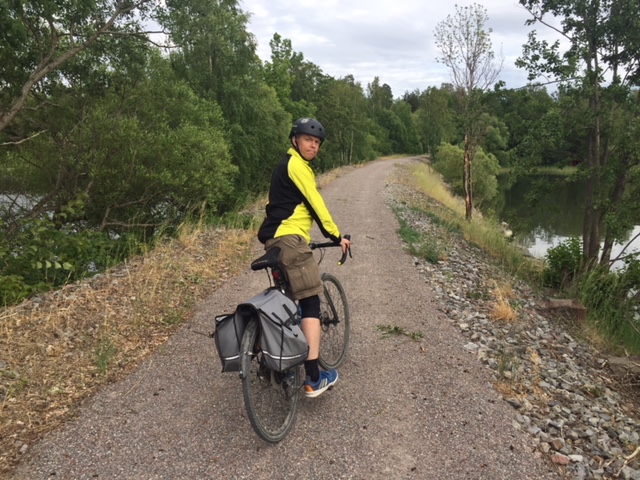 It's not the South Pole we're going to, but I feel like an old-fashioned adventurer, an explorer. Dragging the forefinger over the printed map, read the exotic place names: Ramstalund, Musta, Gryta, Salnecke. In a feature film, one had made a nice transition from my finger and the map to a sunny road with waving cornfields on the sides. There I had come cycling with my modest bike cross and my pack bags on the sides. The reality is not far behind. In a few days it looks exactly like that. My kitchen table plans are put into practice in the fertile upland landscape among the well-kept farms, runes and winding roads.

For me, the element of adventure, the open feeling as I sit and plan my cycling trip is the most attractive. I love cycling, the physical movement, that my climate impact is minimal, that the food never tastes better than after a few miles of cycling. I enjoy reading about the history of the area, enjoying the rural landscape, of shopping by small-scale local entrepreneurs. Yet it is adventure which the bicycle trip means that I enjoy most. The planning, the concentration at the crossroads, the coordination with the map, the feeling of tranquil triumph when one comes rolling at the final destination in the evening.

It was a small chance to get through the old embankment from Uppsala to Örsundsbro. A little messy with my bicycle cross, better with my brother's MTB and it is obviously important to take landowners into account when cycling over private land. Sometimes it was difficult to find and we had to cycle back a bit, study the map, compare with the map app on the mobile. Still, I have to say that it went well and because it is an old stretch of railway through a fairly flat landscape, it is the bird path you ride. Two good alternatives are to cycle from Enköping or Bålsta and follow Mälardal trail to Örsundsbro.

The task this time was to cycle through one of our open packages. It simply means that you, like me, put together your own bicycle journey. Not from scratch, but you buy a nice idea for a trip, get a travel description and a small travel guide that tells about the neighborhood and its sights. A small intellectual exercise is also included in the open package. Accommodation and food stops book and decide for yourself, based on our tips if you want. Maybe you stay two nights during the trip, or you cycle all the way and take the commute home in the evening. 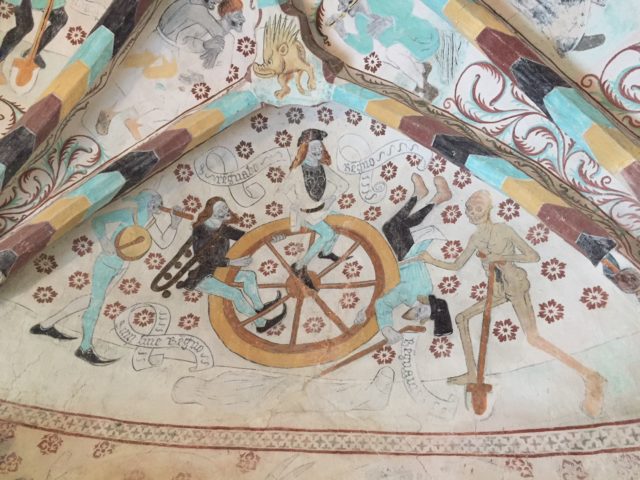 We cycled the package called "Cycle Tour in Sweden's Tuscany" and visited local farms with fine dining. The spirit caught fire when we stopped at the fantastic Härkeberga church where the famous church painter Albertus Pictor painted ceilings and walls in the late 1400s. In fact, he did not paint everything himself but had the help of a number of helpers and apprentices, but the paintings in the church carry his unmistakable touch. The Wheel of Life is a worthwhile illustration of the lottery of man, especially when you have reached the age of 50 and yourself are about to go canoeing down the right side of the wheel ...

After calling and making a forecast of arrival time earlier in the day, we cycled the last bit to Brunnsta farm at seven in the evening. A nice feeling. If you are on long trips, it may feel a bit in the end lamp, my brother can attest. The farm has a coherent noise village structure and the family owns all the houses in the village. We were met by the enthusiastic taxi Sassa and our host Lena. Unexpectedly and pleasantly we were invited to a small family gathering in the former barn where we got to taste the good food and home-made drink. After seven miles of cycling, it tasted heavenly. The kindness and hospitality shown by Lena and her husband Göran went right into the heart. 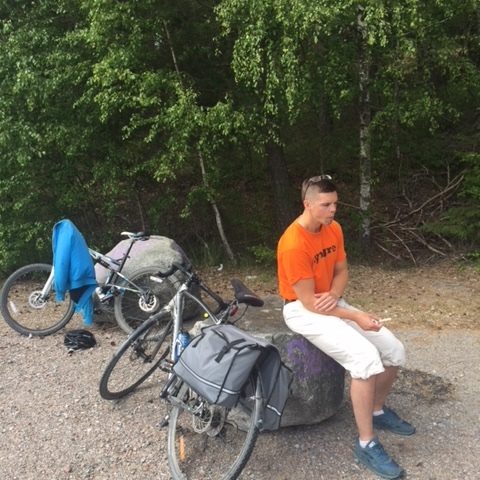 It did not get any worse when we came up to the room which was located in the old country store. Fresh and neat with an atmosphere from the early 1900s, and a private shower. The great thing about a bike ride is that you can indulge in a little everyday luxury in the evening after an active, physical day with some uphill slopes and hints of headwinds. It appeared to my brother as he stretched out in bed. And that it was too early to start talking about the next day's stage with Skokloster as a destination.

Daniel Bergstrand
daniel@swedenbybike.com
Back to all articles